oh, did I not mention it's deeper than it looks? 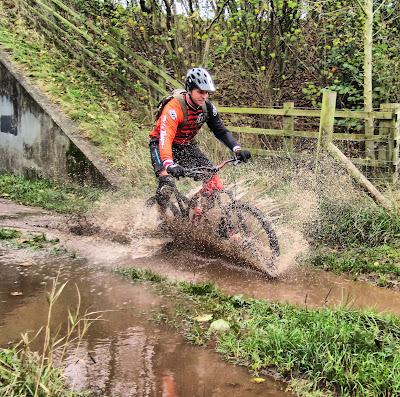 I woke up and checked how the outside world looked through the bedroom window, "Hmm, that all looks a bit frozen" i thought. I then spent the next 20 minute looking for wamer kit to put on. Why is it that throughout the summer all I've been able to find is the thick lycra, the windproof jacket and waterproof socks and now in the arse end of Autumn when I need that stuff all i pick up is the sleeveless, thin, hot weather clothing?
The guys arrived and even though the frost had gone it was still flipping cold and the wind just got stronger throughout the ride. lucky then that most of the ride seemed to involve climbing! the trails demanded a level of bike control not needed for a while, most of the routes have been hit hard by the recent heavy rain and are now saturated, steering is now a lottery, even on the fat bike. getting the back end of the bike to step out is just a brief dab of the rear brake away. This does illicit giggles though.... if you get away with it. I did end up on my back side, but i was no where near the bike at the time. I was taking photos and stepped back onto a log, slipped, a bramble wrapped around my ankle and i found myself sat in a pile of soggy rotting leaves!
I will confess I might not have mentioned how deep the puddle in the above picture was but it certainly made for a good photo. just after this the rain started and I think we made the fastest ever cafe stop after being mad enough to sit outside drinking the rapidly refilling (by rain unfortunately) coffee. here's hoping for a bit of a dry spell