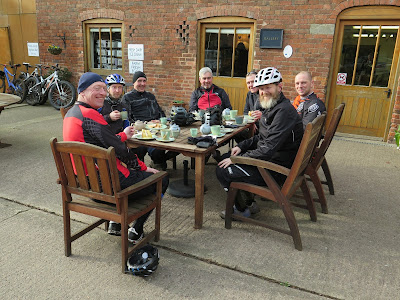 Today there were 9 of us riding, it was like a seen from Lord of the rings, the nazgul descended on the NWAlps and despite it being a little "tacky" it was great fun. Two first timers came along and they seemed to enjoy it! Ian had some puncture issues and had to exit stage left before we reached the cafestop which was a shame (why didn't i get his cake??) and it was great to see Ben back on the trails sporting a strap-on.
the weather played ball for the most part apart from a little drizzle near the end but after the last few days of high winds everyting was calm.
the fat bikes were out in force, 3 in our group and we met another on beacon hill, common as muck these fatties!

If you read my blog often you'll know we eat a lot of cake, it's always featured in our  rides. a lot of pedalling and then a mid ride reward. So you could say I've become a bit of a connoisseur when it comes to baked goods and pastries. I also like to support local businesses but of course if they aren't up to scratch I won't go back and I won't take fellow riders there or recommend them to others.
We first came across Lizzie's cafe at the end of September and you can tell what I think of it when I tell you I and the people I've taken there have probably indulged ourselves there over 20 times since and it's only the middle of November!
It's a little gem and not to be missed. the home made cake is delicious and the portions very generous. infact Lizzie herself said "i serve portions I'd like to receive myself" and i can tell you Lizzie loves cake! The savoury menu is also a must try treat. The cafe is on a farm and the Beef and Ham sandwiches they prepare reflect the quality of the livestock. The highland cattle are cute (as well as tasty!).
There is also a fresh meat shop, icecream and home thrown pottery and art gallery. There really is something for everyone even children as the farm animals can be viewed and there are rabbits and guinea pigs staying there for their holidays.
It's a little gem and if you are in the area it's not to be missed.
you can find Lizzie's farm here Facebook or Liz Monk Pottery Studio
ride 146
14 miles
total 2580
commute 595
Posted by Rocketdog at 17:25