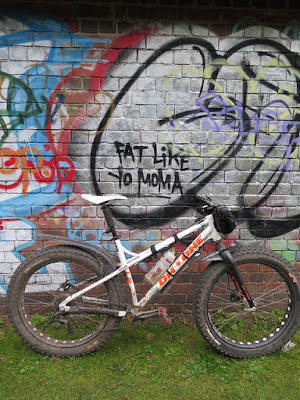 From the outset when I proposed this ride I was at pains to point out that it could be boring, it could be hazardous but there was going to be a lot of pedalling. thankfully only one part of this turned out to be correct.
The plan was to ride from home to Kingswood junction on the canal and turn left onto the unknown Grand Union route into Birmingham. this would take us through some lovely country side and some very built up industrial areas.
We picked a great time to do this ride as the towpath was dry, even dusty in places, given a little rain and the going would be very muddy indeed. It wasn't washboard smooth however and my backside got a thorough going over from the saddle bouncing beneath me.
Dan and Kris and I met Ant in Hockley . Ant and Kris had the most appropriate bikes (HT MTBs) whereas Dan and I had fat bikes. Now apart from that there isn't much to say, in fact I'd say the most interesting part was the industrial area, the Grand Union is long and wide, showing i think how important it was, a lot of large boats must have been able to navigate it. Lots of factories still show where supplies and goods would have arrived and left, there are a lot of derelict and run down premises too and also the sad sight of homeless people sleeping rough under some of the canal bridges.
Once in Brum, Ant fixed a puncture near millennium point whilst Dan practiced his fatbike trials and street moves much to the interest of passers by...or was it the "massive wheels" that were attracting allthe attention?
We had lunch near Brindley place, were offered saucers of milk with our tea, directed a guy to London..
"how far is it?"
"two and a half days mate"
and started the last leg when we started to get cold.
thanks to
Great weather
easy to follow route
quiet tow paths
no thanks to
the smell of urine
several cases of cramp
passages narrower than your handlebars
I'm glad we did the ride and chose this route but I'm in no rush to do it again and 50 miles is far enough to pedal a fat bike!
ride 128
50 miles
total 2294
commute 523
Posted by Rocketdog at 22:49