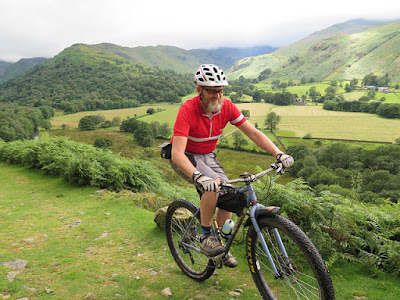 This week we will be mostly...riding in the lake district. It has proper hills and we decided to sample one on this ride. It didn'y look too bad on the map, just a bridleway around a hill and down to Ullswaters edge in a town called Patterdale, easy!
So the bridle path started on the valley floor and was as easy as a bridle path at home, soon though things started to get a lot steeper, then more and more rocky and loose and eventually we had to get off and push. There were fewer and fewer ridable sections and lots of false flats where for a brief time we got excited that there might be a downhill bit, but it went on and on and ever upwards. In fact 908ft of climbing over just 2 miles! we reached a plateau but we could see that the bridle path then carried on up and around the next hill with more climbing. We opted for the footpath in a downhill direction instead, cheeky I know, but it was deserted. It soon became apparent that the chances of us cycling into a walker were very slim, This was because footpaths are very different beasts to those at home. It was rocky with narrow gullies and uneven steps up to 2ft high with a sheer drop on one side. at home footpaths are ridable but these were not and it took us 19 minutes to get down to the nearest bridle path where we could ride down into the town.
It was an eye opener but very exhilarating and a great sense of achievement even if we didn't complete the whole route. In hindsight a;; the riders we saw in the lakes on full suspension bikes had the right tool for the job and a rigid bike (and myself) was a little out of it's depth for this sort of route. I'd love to live up here and get the chance to learn how to ride it properly
ride 102
6 miles
total 1836
commute 417
Posted by Rocketdog at 19:58