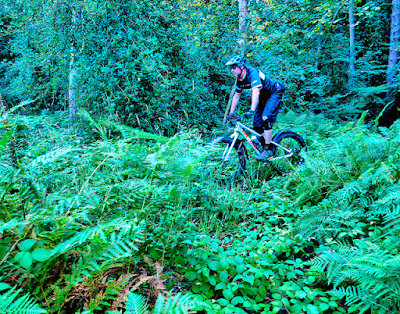 Dan and I met early before the official night ride meet time for some illicit riding in the woods. This back fired in two ways for me. for one, it was incredibly hot and humid and I really seem to suffer in those conditions and two, I'd not eaten much all day so the early start meant I didn't have time for food. This was the cause of the bonking episode i had a couple of hours later and I had to beg an energy bar from The Spaniard. This also meant the beer I had at the post ride stop went straight to my head! Other injuries between us were numerous bramble lacerations and an eye-stinging nettle coming together. Still enjoyted it immensely though!
ride 108
14  miles
total 1944
commute 421
Posted by Rocketdog at 16:59