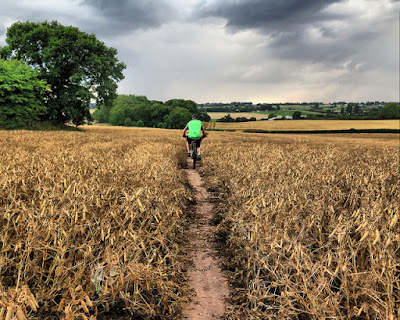 I haven't ridden on a Saturday afternoon for ages but The Spaniard could only do Saturdays so it was time to see how busy the trails were on what was a very humid day. In fact, the woods weren't a busy as I feared and we were able to do some of the familiar trails without running into anyone. Conditions under wheel were also good, even dry in places!
The thing with humid conditions at this time of year is that the day inevitably ends in a thunder storm, today was typical. Black clouds rolled in and the distant rumble of thunder came ever closer. The ride in these temperatures was always going to involve a beer garden and we stopped at the crown for a pint. as we readied ourselves to leave i noticed my rear tyre was flat, we weren't going anywhere for a while! Fortuitously this coincided with the rain brought by the black clouds to start. It quickly got heavy and we had to seek shelter under the pub garden umbrellas. A tube malfunction (the replacement one also had a hole) meant we stayed longer, in fact until the rain stopped, trapped at a pub, how awful!
ride 109
16 miles
total 1960
commute 421
Posted by Rocketdog at 19:25