tour of the three cols 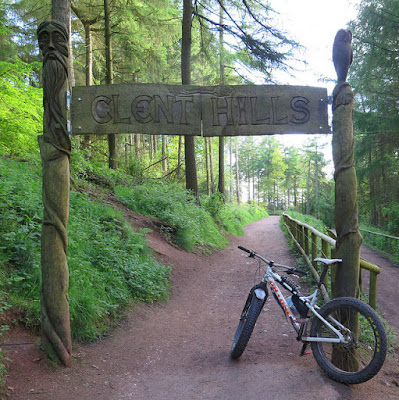 I put a post on the NWAlps facebook group asking if anyone fancied a reasonably fast ride (taking the fat bike into account of course) over Lickey, Waseley and Clent and back today. Unfortunately there were no takers so it was just me, with some very dry and dusty trails and quite a lot of insects for company on this ride. it was early evening on a gorgeous day but surprisingly there were very few people around so i was able to make good progress and even had time to scope out some wicked singletrack. Quite "cheeky" though so i can't advertise where it is but if you like riding tight loamy turns then you'd love it. I had one sketchy moment on a downhill a little later when I thought i wasn't going to make a sharp left handed downhill turn. with the rear wheel locked i only just managed not to go headlong into a barb wire fence, more by luck than skill probably and if i had any hair it would have been raised right then! bouyed by escaping injury and staying upright I resolved to take the more technical route back from Clent via Calcot hill, through the deer farm and back to Fairfield.
This ride is a surprisingly short route when you only look at the mileage, just over 20 miles but when you realise you climb up and the descend the 3 highest hills in the area coupled together with all the lumpy and technical bits in between it's quite a decent workout after a day at work.
ride 72
20 miles
total 1211
commute 306