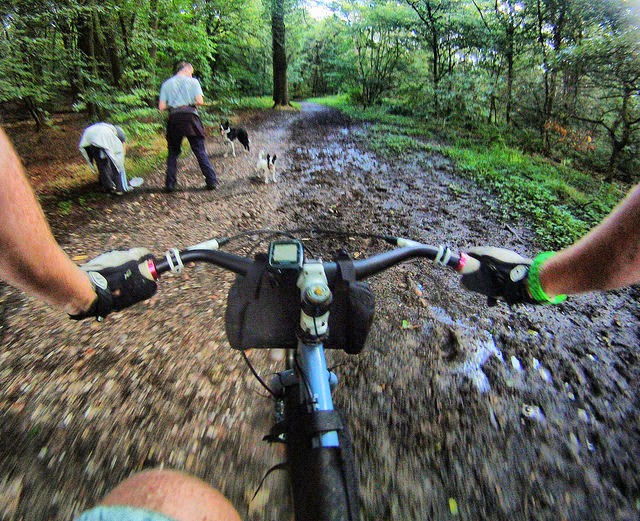 Charlotte hasn't done much off road riding and the last ride of 27 miles was a bit to far for her, she's fine on a road bike easily riding 100k+ but a mountain bike is a different thing. In an effort to redress the previous ride I suggested a ride around the woods, 10 miles tops. The first puncture hit before we'd even touch tyre to dirt! the valve ripping out of Charlotte's front tube. after a struggle to get my pump to work due to a seized pipe we managed to inflate the spare and continued on. Within 4 miles I had a rear flat! No panic, i removed the old tube, checked and found the thorn responsible and went to put in the spare tube, only to find while it was folded up in it's bad the valve end had impaled into itself and there was a small hole, so totally useless! So Three punctures tubes between us and on 3 inflated wheels out of Four. Charlotte, having the only fully rolling bike drew the short straw and pedalled off to get the car to pick up my stranded bike. I refitted the original tube and tried inflating it, it barely held air but as most of the return home was downhill I thought I'd give it a try. It was reasonably successful and I made it to within 200 yards of home when Charlotte passed me in the car, she'd ridden home, got to within 1/2 a mile and had yet anther puncture! 4 punctures in 8 miles, definately a record for me and not one I want to equal or repeat anytime soon.
Ride 117
8 miles
Total 2297
commute 523
Posted by Rocketdog at 18:30