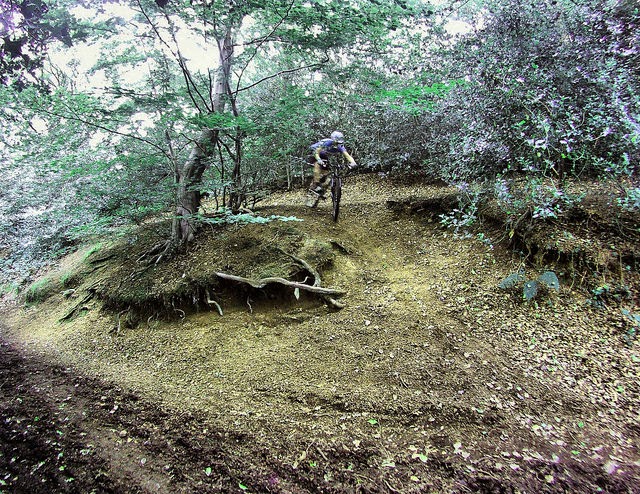 First ride since the 24 hour race and my legs felt like lead, surely the only way to cure this was a long-ish ride over some hills?  And so i did, over Lickey and Waseley and up to Clent, past the stones and began the descent to the Fountain, everything going well so far and my legs had woken up. As i reached the back of the 4 winds i decided to check out some singletrack i used to ride a while ago (actually years!). It was still there and just as technical. I stopped to check out a section with a washed out stream/rain gulley transversely across the trail. It was deep but i reckoned a 29er wheel would get across it. Well i was wrong! my wheel dropped in and...stopped dead, I however carried on. basically i fell flat on my face, I'd put my arm across in front of me and this was the only thing that stopped a skin/ground collision, As it was i pushed my nose up and trapped my sunglasses under my helmet and the top of my head must have hit the floor as i rolled forward. After untangling my legs from the bike i checked for blood, nit even a nosebleed and nothing appeared broke, on me or the bike. So i took a few photos of myself riding the trail and then followed the route i had been planning. I felt ok, if a bit shacken and my arm was quite sore but it wasn't until i got home that i checked my helmet. It was dented on the top and underneath the dent was a crack in the polystyrene, basically a write off. this falling on your heath lark is expensive. I don't recommend it!
Ride 91
21 miles
Total 1755
commute 445
Posted by Rocketdog at 23:00

Expensive, but not as bad as falling off without one! ;) glad you're ok, could have been far worse..