the wyre in spring 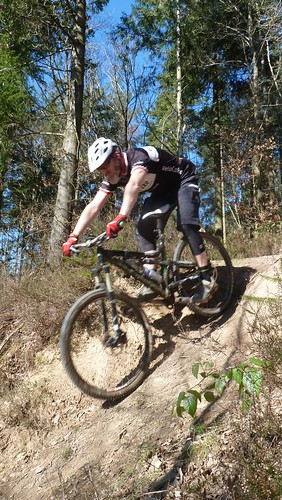 the wyre in spring, a photo by rOcKeTdOgUk on Flickr.

with the recent weather and the fact that local trails had started to dry out it was too tempting not to visit the Wyre forest to check how things were going.
Dan and I met Craig on the way and after some ham fisted tyre inflating (Craig!) we pedalled off to see what we could find. It didn't look good, the first trail was hub deep in very thick mud, if it had been wetter our tyres would have cut through it, if it had been hard we could have bounced along on the top but this mud just sucked at the tyres and it was impossible to get any forward momentum. Thankfully we had the fortitude to push on( literally at one point) and things improved greatly, a dry line had formed and the world seemed a better place as traction and speed increased.
Overall the forest was 75% perfect, where the sun and wind had reached the trails were bone dry and dust was seen to be kicked up, all hail the dry weather Gods!. under the trees where the sun hadn't reached it was hard to judge if that darker patch of ground that you were approaching rapidly was actually shadow or a big cloying, sucking, pit of inescapable over the bars inevitablility. Dan hit one of these on "Jedi" and although he escaped the ignominy of a trip through the air I'm not sure he was ready for the rapid deceleration that stopped him dead as I flashed by giggling.
We all survived "camber" and the steep techinical bit at the end of a trail I don't know the name of but then inexplicably Craig hit a tree stump on the most innocuous trail next to a stream and ended up in what Dan described as a "full scorpion", on his head with his back and legs arching over mimicking the creature's sting. He was fine and the fact that he'd just uttered the words "that water looks inviting" made our laughter louder as he picked his bike out of the water!
It was warm enough to attempt the stream crossing, ruining the couple on the bridges #selfie in the process, our wet feet for once self inflicted rather than forced on us by inclement conditions.
The cafe was busy feeding fat filled goods to the folk who had just completed a run for the heart foundation which seemed a bit of a contradiction but i guess they deserved a treat.
The shin ripper lived up to it's name and we also attempted a few steep drop ins with no hassles.
Overall it was almost perfect, dry, sunny, early in the season for the nasty black flies to be out in force and no injuries from over exuberance from going mad in the sun
ride 32
17 miles
total 551

I'm glad you guys had a great time, I had a feeling you would!
I still haven't made it over to the Wyre but I intend to do so this summer.

Uncle Jonnie is fantastically confident in his SPDs and riding like a pro!