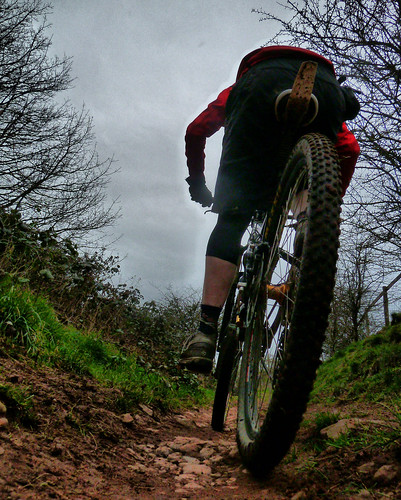 just messing about, a photo by rOcKeTdOgUk on Flickr.

Another early work finish saw me hitting the trails in daylight on a week day once again, I had the vague plan to head for the Waseley side of the kingdom of the NWAlps via the woods of course, I was fully equipt with lights so if i finished after dark it wouldn't be a problem. There was no rush
With this in mind I could afford to mess about a bit, do the same trails more than once, try a few new tracks that i spotted and test a few old friends that have been out of bounds during the winter. This is what most MTBers did when we started riding. Just messing about in the dirt with no agenda, no guilty feeling of doing a minimum number of miles. So what if my average speed was in single figures, rides should be about the experience and the fun, not the performance. It is still good to go fast at times though, pushing the speed on the downhills is the adrenalin rush that we crave, so what if you meander up the next ascent, saving energy to try and break your own wheelie record or narrowly avoid reducing the chances of bearing children with a top tube man tackle interface whilst attempting an ill advised endo?
In the end, with all the messing about I'd still done 14 miles, which is about what I'd have done on a head down, don't stop ride, makes you think..
ride 35
14 miles
total 594