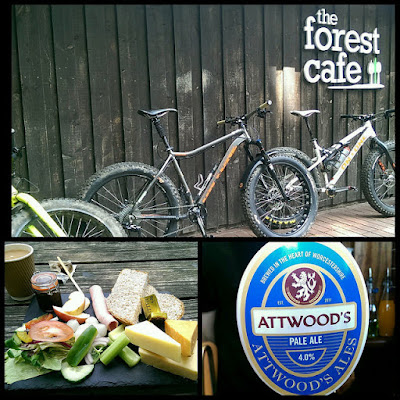 inspired by the exploits of the guys and girls riding the highland trail 550 race I thought we should do something epic. Epic in this case being a ride to the wyre forest and back. Not really epic you say? well yes you are right, it doesn't compare to doing a self sufficient ride through the wild and remote parts of the highlands of scotland. So to make it more of a challenge i suggested we attempted to ride it on the most inappropriate bikes for the mainly road route, so no road bikes, CX bikes or even 29er MTB, ^"lets do it on fat bikes" i said, it'll be fun!
What it was actually was hard work, fat tires drag on tarmac and as it's a fairly flat route there is a lot of pedalling. good job then that the weather was perfect. I did pop a bit of off road in and there was a great singletrack descent before we got to Bewdley and the forest cafe for lunch. it began to get more epic on the way back as the miles increased, the hot temperature took it's toll and the sheer weight of the bikes started to affect our legs. luckily we were able to rehydrate at a pub, lifting our morale for the final push. well almost, once the beer wore off it was a grind to get home and the final climb up the lock flight to Tardebigge nearly broke me. But i'm happy to say that made the final distance all the more special. without a bit of pain, running out of drink and periods where you don't think you have it in you to finish it wouldn't have been epic
ride 62
64 miles
total 1343
Posted by Rocketdog at 21:57