the Tour of the Black Country 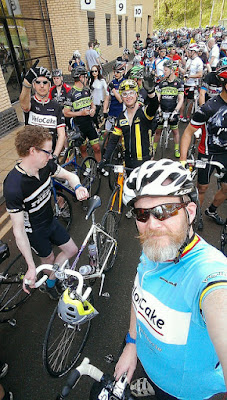 After lots of trial runs up the Waltonberg the day finally dawned. The bike was ready but was I?
I spent the saturday before trying to hydrate as the weather forecast was for very hot temperatures and sunshine. I even abstained from alcohol! what a sacrifice. I also ate chicken and pasta to try and top up the carbs.
Sunday began with a trip to Aldersley velodrome, with plenty of time to spare we registered and soaked up the atmosphere and checked out the various bikes being wheeled around. lots of expensive bikes. quite a few cyclocross bikes and the odd MTB. I got to have a ride on a Pashley Guvnor belonging to long time twitter friend @mattmbr who I'd never met in person. he and his pals were all riding these fantastic British made replicas of bikes from the 1930's and every one of them were wearing woollen jerseys, plus 4's and stripey socks, they did look the part but must have been roasting in the heat. for more info see @GuvnorsAssembly
I also must say hi to the guy who stopped me and said he enjoyed reading the blog, he's either a literary connoisseur or has far too much time on his hands!.
Our start time was 0944 and we presented ourselves  by the start line minutes before this only to find a queue right around the corner. We actually started and hour and 20 after our official time, it was not very well organised and i was glad it wasn't raining as it would have been a miserable experience.
Finally starting it soon became apparent to me that the heat was going to be a factor for me. Moving along gave a false impression of the strength of the sun. As the time approached midday and stop, such as at a junction felt like you'd stepped into an oven with the sunday roast!
Mentally I think I'd alrady written off the ride because of this and i was dreading the approach to the Waltonberg as it's a near 5km all uphill and includes an ascnt of Shut Mill Lane. I stopped for a call of nature at the bottom of this lane, resigned myself to just plodding up it. with no breze or airflow it was very uncomfortable for me, however, when adding my data to strava later i was shocked to have gained my fastest time ever on the section. the Waltonberg came and went, i didn't mak it all the way up, i'd like to blame other riders getting in my way but i have to admit i didn't push myself for fear of blowing up or overheating, pathetic really. Over the top and down the other side the dirt descent was fun, i did this time genuinely get stuck behind some riders going so slow i thought i might lock up my brakes trying not to run into them. the route after the feed stop was good and undulating where you could carry speed and i felt a lot better from this point on.
the whole point of the TdBC is that there are around 19 sectors of off road riding in a homage to the Paris-Roubaix professional bike race. these are farm tracks and bridleways that range from sandy to gravelly paths to stone and brick and pot hole strewn double track. these wer a lot of fun, probably they'd be hardly noticeable on an Mtb  but on a skinny tired road bike they became more of a challenge. years of experience of riding off road helped here as i picked the smoothest lines whilst others battered through. i had no punctures but i saw over 20 riders who did. you could tell who usually rode mtbs form their riding style, it's amazing how stiff some people looked and how others used their arms and legs to absorb the roughness of the terrain.
the final section of off road leads you back into the velodrome we started from and as they do in the paris -roubaix race we did 1.5 laps of the velodrome and trying to out sprint other riders was great fun.
in the end my time was 5hrs12mins, i was hoping for 4 hour-something. the heat didn't help, it got to 27 degrees, but i think mentally i had already resigned myself to a slow time. I let myself down and it was a pretty poor show if i'm honest.
overall it was fun and only the chaos of the start and the entrance fee put me off having another go next year
ride 55
56 miles
total 1182
Posted by Rocketdog at 19:45