never look a gift pie in the eye...or something 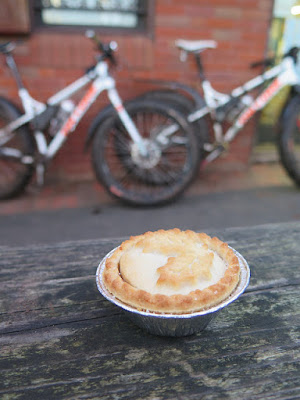 Having spent much of the previous day on a middle aged  afternoon out* infused with alcohol and street food it was perhaps wise that today's ride didn't start until after 2pm. as it was both Dan and I felt a bit groggy. The trail conditions didn't help, i've not seen it as wet as this on Bono for a while and how we got down both it and bus stop without ending up on the floor was a miracle in itself. we explored a potential new route off Waseley that with the help of some trail tools could be a good alternative to heaving your bike over the gate. we dined with style (ok, slightly glassy eyes) at Lickey visitor centre and Dan requested a mince pie, tis the season after all. I was going for nothing but a mug of tea, being a good boy (ok i still felt queasy) The lovely girl behind the counter then insisted i also had the last remaining one too, "for free" as it was the end of the week. I did question it's age half jokingly but in the end it tasted ok and gave me a bit of oomph for the rest of the ride. Ending in darkness was something we don't usually do and i extended the ride a bit to take advantage...and burn off some mince pie
ride 152
16 miles
total 2670
commute 649
*we were on the train going home thinking of bed whilst the youngsters were just making their way into Town!
Posted by Rocketdog at 16:52