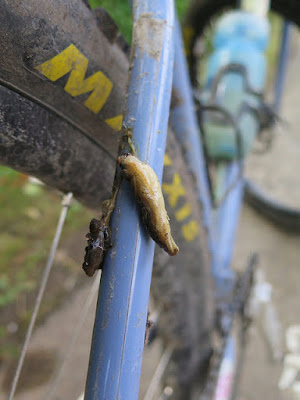 Breakfast in Birmingham and then a ride from the big city back to the NWAlps via the Brum-Worcs canal, however it all went a bit to quick and in no time i was back at Kings Norton so I decided to deviate from the route and join the north stratford until Dickens Heath. It was drier than i expected it to be after heavy rain the day before, however it must have been quite moist though as i picked up a passenger. I didn't notice until i was well away from the canal. The slug was wrapped around my seatstay, unfortunately by it's guts. It was well stuck and i had to leaver it off with a stick! My bike is heavy enough without carrying passengers.
ride 105
28  miles
total 1894
commute 417
Posted by Rocketdog at 21:16