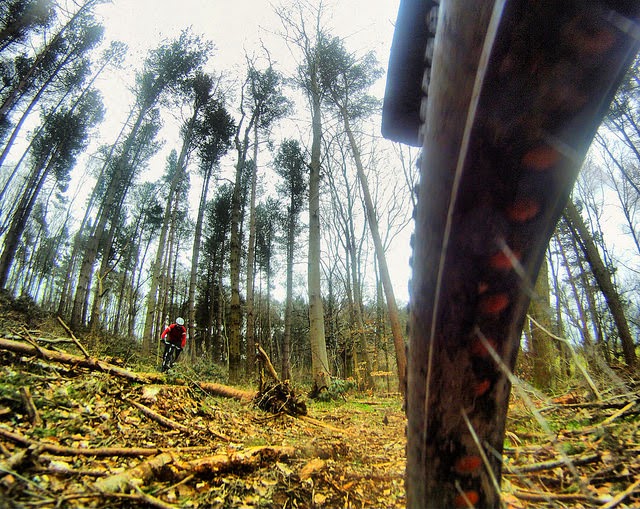 Today ride was tough for me, I really didn't have the legs and it was hard going keeping up with Dan and Ian. We rode on a little used bridleway, little used by bikes that is, horses use it a lot and evidence of their passing was easy to see. Easy to see but not easy to ride on. The route was very churned up in places, the soft, water saturated clay thick and cloying and full of deep  hoof prints.  we had to resort to pushing. Eventually we got to Rowney Green, pedalled up the steep road and into the woods. Last year there was some quite good singletrack routes here but there has been some forestry work and the tree have been thinned out. The machines used to do this have had a devastating effect and it's a bit of a mess to be honest. There is new planting but it'll be 20 years or so before it's back to how it was.
As i started the steep climb out of the woods i suddenly went from a nice low climbing gear to the highest hardest gear instantly! I got off pretty sharpish and examined the rear mech. the gear cable was flapping loose, the nut must have come off!. I spent the next few minutes looking for it as i didn't fancy the ride home in the hardest gear. It was then Dan checked the mech and saw that the nut was still there, so used to shimano gears I'd looked where one of their fasteners usually is, saw nothing and assumed it had gone. Dan though knew where to look and all i needed to do was rethread the cable and tighten the nut, how embarrassing!
there was a treat for us though to fortify us for the return journey and that was Tea and biscuits and Dan's folks.
ride 29
23 miles
total 475
commute 173
Posted by Rocketdog at 19:42