On One Fatty review 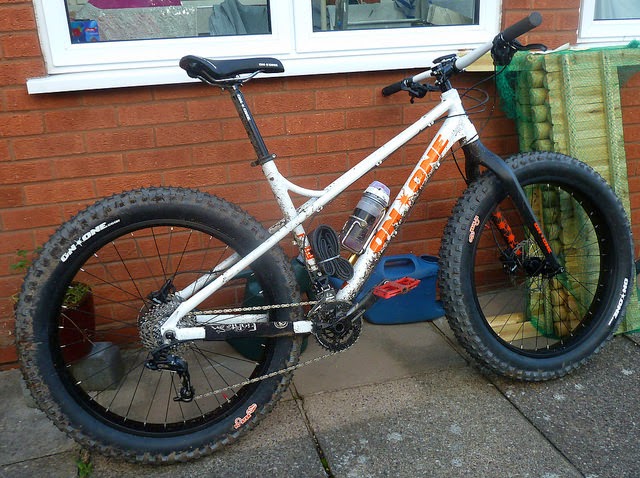 I’ve been intrigued by fat bikes, bikes originally designed to be ridden on snow & sand for a while. They look a lot of fun, they also look as if they would be hard work. They look as if they would be even harder work on normal trails.
I’ve tried a few, the first was a Surly Pugsley in about 2006 then a Salsa Mukluk about three years ago and to be honest it didn’t inspire me to look into getting one myself. I briefly rode the Mukluk on the local trails not on snow or sand though. I’ve tried a Salsa Beargrease, a Genesis Caribou, a Kona Wo and an On One Fatty, but none of them were actually the right size for me, they were fun but not something that jumped out and made me think I had to have one. All of them (apart from the tiny framed carbon feather light Beargrease) seemed heavy and a bit ponderous on the steering front, probably ideal for snow, but we haven’t had snow for 18 months in the NWAlps so I was unsure whether a fat bike was really worth it.
Cut to the present and I’ve been getting more and more fat curious having competed in a few endurance races against riders on them, they do seem a whole lot of fun so when a quite frankly ridiculously cheap option to get a full bike appeared I took the plunge and ordered a 20 inch “fatty” fat bike from On One.
The Fatty is designed by Brant Richards, primarily for a long distance snow race he entered a while ago in Finland but instead of designing purely for snow he made the geometry of the bike much more normal trail friendly, it’s probably got the slackest head angles of all the bikes I’ve ever owned, It came full assembled in the box, all I had to do was turn the bars and it was ready to ride, great job by the team at on one as after ordering the bike I then changed the spec by swapping the steel fork for the carbon fibre one, all without hassle. Even the delivery by Yodel was smooth and without incident!
So, the ride. First impressions are that there is a lot less “self steer” on the bike than some of the others I’ve tried, this is where the front tyre wants to pull you in one direction or the other and needs constant correction. I was able to ride the Fatty no-handed easily without it wandering. It doesn’t ride as heavy as it is (or looks). I was concerned that the 36/22 chainrings would mean I would be on the granny ring pretty much all the time especially off road but surprisingly I stayed on the big ring for all but the steepest/longest ascents. Conditions were pure Autumn, very wet, very muddy, slick leaves and greasy roots, not a snow flake to be seen but the grip from the 4” floater tyres was amazing, where a normal tyre would spin on the slippery surface these just dug in and propelled me forward. There was a lot less “mud shimmy” than normal tyres produce when they seem to loose control and steer where they want to, these monster tyres just plough a furrow and keep on going.
The low stand over is very reassuring (all sizes 16-18-20 have the same stand over) and I expected it to be a slow ponderous bike but I was throwing it down gradients and into turns like it was a hard core hardtail, it actually needs a dropper post to enhance this further. I rode all the usual trails to get a fair comparison with other bikes and it actually surpassed some of them, I can never ride up steps on my other bike, this one was only defeated by the greasiness of the topmost wooden one. It’s not often you can pull a bike from it’s box and feel instantly at home on it with the confidence to let it go down muddy chutes without some tweeking of the set up, all I did was set the seat post to the correct height!
I played with the tyre pressures a little but I might have taken the front a bit too low as it unseated the bead and made it wobbly, it didn’t come off the rim though and just took a bit of pressure to get it to pop back on. The penalty for the huge tyres isn’t the rumble on tarmac or the extra resistance there it’s the fat that they throw up a huge amount of mud, I’m going to need help from Mudhugger to over come this.
After just one ride it’s wrong to say that I’m sold on the idea of fat bikes but first impressions count and I definitely want another date with this Fatty and for the first time in years, probably as an adult I want it to snow this year!
Ride 154
20 miles
Total 3137
commute 830
Posted by Rocketdog at 10:47

Hi there I am also getting 'Fat Curious' LOL I do like the look of the fatty and have been pondering the offers at Planet X of late. I am a little wary as I am quite tall with a long inside leg of 36" so wondered if the 20" frame would be big enough for me ?? How tall are you? If you don't mind me asking.
Cheers for the great review

That is great to hear :D Happy bunny. Just need to see if I can pick up a second hand bike for the right price or wait till Planet X get the 20" frame in again soon ;)

Thanks for the help. I decided to get the fatty trail as it was on a mega 20% extra discoun over Christmas. Just need to wait for the pickup date to come in :) Happy trails 2017 ;)
Richard