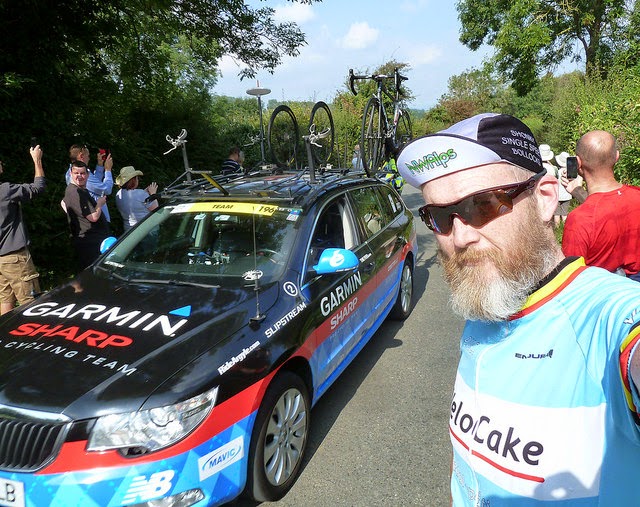 When i hear that the route of the Tour of Britain road race was coming near to the NWAlps i knew i had to book the day of work to go and witness the spectacle for myself.
|I chose the KOM point in Broadway as my destination and gave myself plenty of time to reach it. As i got closer and closer to the town i caught or was passed by more and more cyclists and two of us formed a mini peleton into the town and began an ascent of Snowshill. It's not that steep but does go on quite a long way and today we had the added pressure of the line being lined by riders and fans waiting for the pros to turn up. After crossing the summit line i dropped back down a short distance, found a good spot and waited for the riders to come through. After riding up i knew what effort it took for me to do it but the pros just made it look like they were out riding with their family on a flat promenade some where, hardly breaking a sweat and carrying an icecream at the same time, seriously impressive.
It only took about 10 minutes for the first car, the riders and then the broom wagon to pass and i then joined the mass exodus of cyclists down the hill. I then had a choice, ride home or extend the route. I decided to ride on to Evesham and had lunch (a massive piece of bread pudding) at the riverside cafe. I then pedalled on to Worcester and route 46 towards home. at the Worcester point I'd hit the 100k point and at that point i then decided to go for a century. The 100th mile ticked over about half a mile from home and aprt from stiff shoulders i felt pretty good
Ride 132
100 miles
Total 2704
commute 613
Posted by Rocketdog at 17:09