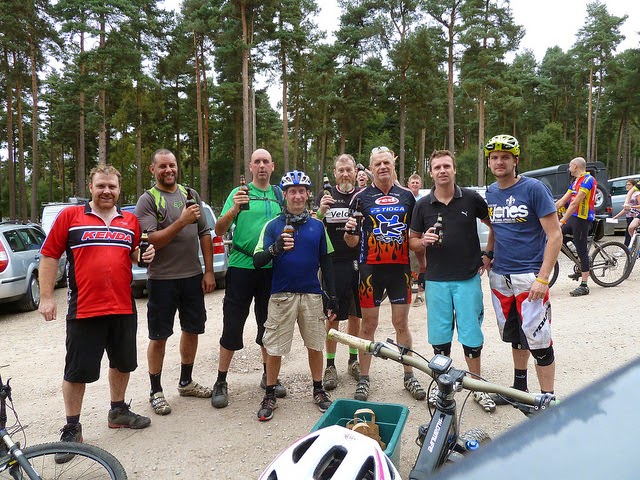 You are only 40 once and i guess a lot of blokes at that age feel a bit depressed about it, probably spending the occasion getting drunk,maudlin and reflective but Ant is a bit different to your average chap, you see he's a cyclist and we have a bit of a different outlook to non cyclists. ask a cyclist what he wants to do to commemorate a special event and 99 times out of 100 he or she will say "lets go for a ride!" (the other time they'll say "lets buy a new bike!") Guess what Ant decided he wanted to do?
We met on a saturday morning at Cannock chase, home of the Monkey and follow the dog trails. Now the big issue with Cannock is it's proximity to Birmingham and this means it gets very very busy and because of this it isn't my favourite place to ride at all. However Ant had enlisted the help of Nick who knows the area like the back of his hand and I knew we were in for a great route using hardly any of the way marked trails and lots of off piste singletrack.
And so it proved, with minimal fuss we we ready and after a very short section on the monkey trail which was already busy we turned onto natural trails and were on our own, this set the pattern for the day, super singletrack, technical and fast downhills, cannock's trademark narrowness and trees that seem to reach out and grab you and not another rider to be seen. It was a very chilled ride with no ego's, everyone just out for fun. The area has a huge amount of trails and we only scratched the surface of what's there.
Seemingly only just after we started (always the sign of a great ride) we were back to the final descent on the official trail and it was a shock to the system to see so many riders, even queues of them at one point!
We were spoilt by Nick's local knowledge and also by Ant and his O.H. who had prepared goody bags for everyone I'm sure there were a few jealous looks in the car park as we cracked open the beers (you can see the thirsty onlookers in the back round)
Happy birthday Ant, here's to many more birthdays and even more rides!
Ride 140
19 miles
Total 2867
commute 722
Posted by Rocketdog at 19:20

Thanks, my friend!
It was certainly one of the most enjoyable and memorable rides I've ever been part of. A far more worthwhile celebration than sitting in a pub for hours and not being able to remember anything afterwards!
I'm honoured to have such good mates to ride with.