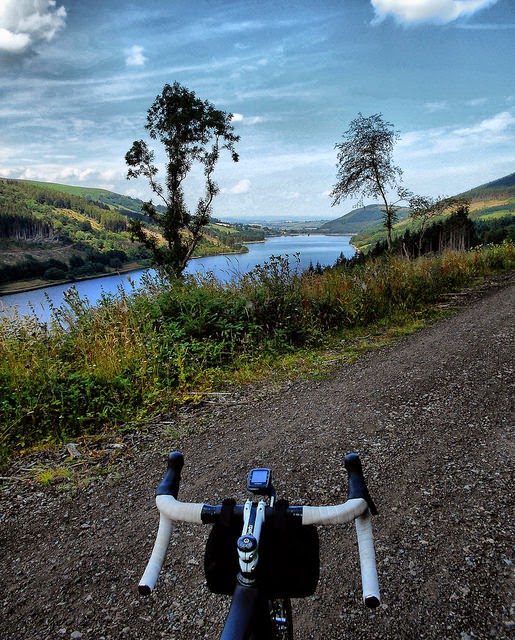 The first ride in Brecon was meant to be a short meander to acclimatise to the far hillier terrain around Talybont on Usk. So we followed the Taff trail to the town of Brecon, had a coffee and cake, a quick look around the shops and then started back the way we had come. @charlottetcr had done a bit of research and had spotted that bike route 8 was also part of the Taff trail so we turned off the route and followed the signs and eventually passed Talybont reservoi. On the map it looked like you could ride down one side and then back along the other, simple!
It seemed a long way to the turn off and as we pedalled over a river bridge we passed a sign that said 20% climb. well it couldn't be far up could it? well yes it could, around 1.75 miles and was in fact the tarmac climb over "the gap", checking the Garmin later it recorded 33.1% at one point! it's the longest i've ever climbed in bottom gear and i was puffing a lot by the top, cattle grids didn't help either.
At the top we found the "road" back along the waterside which turned out to be much more suited to a mountainbike or a rally car on a gravel stage. We were on skinny tired road bikes and it was very dodgy going on some of the bigger rocks. Thankfully it was all downhill, in fact 6 miles of it, it was a relief to get to the end and back on tarmac as muscles were sore from standing up for that long to absorb the bumps. we crossed the reservoir causeway and it was more downhill all the way back to the cottage we were staying in. not such a gentle introduction but he views were certainly worth the sweat and pain.
Ride 108
27 miles
Total 2127
commute 523
Posted by Rocketdog at 20:16