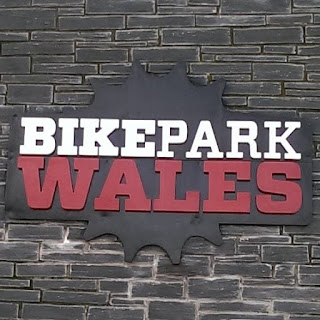 what can i say that probably hasn't already been written about Bike Park Wales? not much but the fact that this was the only picture i took all day tells you more than a 100 action shots would. i was too busy having fun!
BPW is a trail centre with an uplift and i can honestly say its the most exhausting days riding i've ever done and not actually done any pedalling. you need full on 100% concentration at all times and its a full body work out flicking the bike side to side for the tight turns, using your upper body to force the fork into the berms for grip and then shifting your weight back for the on rushing jump. i got to the bottom of the first run sweating profusely and aching in places that never normally do and i'd only been riding downhill for about 4 minutes! what an adrenalin rush.
a hardtail bike probably isn't the best choice for this riding if you want to go fast. keeping the rear wheel on the ground is difficult on rocky sections and as it bounces and you are trying to scrub off speed for the next turn on the route the rear wheel locks and then skids as it hits the ground again momentarily. basically i over shot quite a few! Also as the day went on and i got more and more tired I didn't have the strength to force that front tyre into the turns so the front wheel lost traction a few times. I can see now why the top riders pay just as much attention to upper body strength as they do to their legs.
The up lift was very efficient, the longest i had to wait was 8 minutes and a couple of times there were 2 buses arriving at the same time.
I think it was brilliant, next time I'd like to be riding a full suspension bike as the battering i took on a hard tail was a big factor in the fatigue i felt later in the day. It wouldn't be as much fun if you'd booked the day and it rained as there is no shelter at the uplift site and even 8 minutes standing in the rain would quickly become tedious and cold.
Everyone enjoyed it and it was a surprise no bikes or riders were broken given the terrain and how we were throwing ourselves down things.
when can we go back?
ride 35
19  miles
total 796
Posted by Rocketdog at 18:15