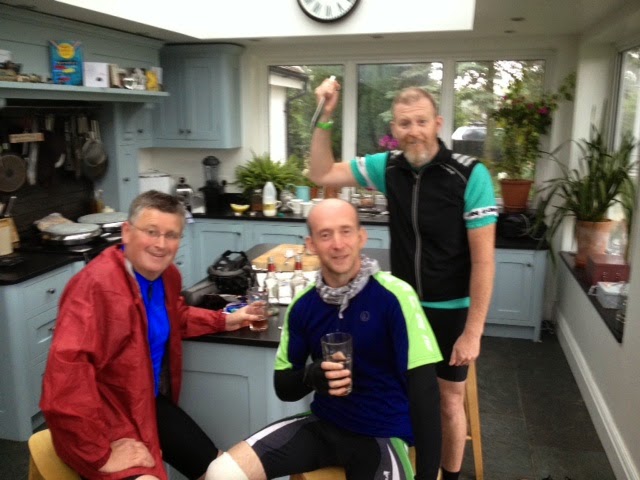 Dan and I drove over to Jonny's to meet him and Ant for a road ride as they were training for an up coming charity 100 miler. Dan is a big chap (in height rather than girth) and shies away from lycra normally but even he is sensible and knows riding long distances is better in kit specifically designed for it. Don't tell him this but he looked like he belonged in it and every part the seasoned road cyclist (oh, he''ll hate that!). Ant was the guide for the day promising a long downhill start which inevitably meant an uphill finish but we set a high average speed (too fast actually if this had been a century attempt) and the first part of the ride went really quickly. We were playing Tour de France a bit too much at times and were in danger of burning ourselves out and it was good to stop and indulge in a  Pork Power Bar at a newsagents before continuing on past the House of Mary Arden. it was at this point it started raining forcing us to put on jackets to stay comfortable. This didn't ruin the ride though as the scenery was so great, chocolate box cottages and views that weren't marred by the dark clouds and precipitation, as the rain eased and jackets came off again the speed once again picked up, I think everyone was almost always on the big ring and i think I only used the inner one 2-3 times the whole ride. It was flat-ish but there were some lumpy climbs to tackle even if short, the best technique probably was to try and carry speed and sprint up. For the most part the roads were quiet and on twisty lanes which made for a very pleasant route. I did miss my other road bike today as it had mud guards and would have saved me from a moist posterior!
I'd neglected to put the memory card in my camera and had to rely on Dan to take one, and this was harder than it seemed as we didn't really stop and the phone being used in the rain would have been a mistake. This is why the picture is of the post ride cuppa and I'm not really trying to stab Ant in a killy killy stab stab serial killer stylee
Ride 94
51 miles
Total 1834
commute 445
Posted by Rocketdog at 20:39

Were we on different rides?

A fun ride though, chap, even if you are used to the dizzying heights of the North Worcestershire Alps...